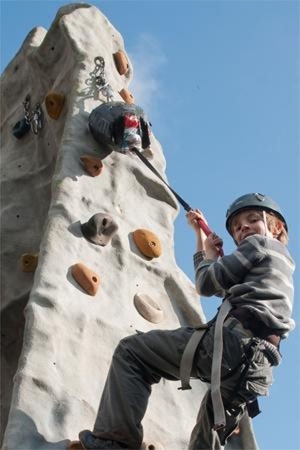 1610 is a non-profit making Leisure Trust (formerly known as Somerset Leisure) which manages 13 leisure centres based on school sites across Somerset. The Trust provides a wide range of community based activities from healthy living initiatives, adult learning programmes to workforce development and training for the sports and leisure industry.

1610 is congratulating one of the rising stars of the Glastonbury Fencing Club, Josh Stevens who has just been crowned the U14 British Fencing Champion at the British Youth Championships in Sheffield last weekend.

The Exmoor Gym at Dulverton is to reopen for a week later this month, for a special week long programme of free activities as part of on an ongoing review of services by 1610 leisure trust which manages the facility.

When thirty four year old Darren Pitt from Bridgwater steps up to receive his training award at the Grand Pier at Weston Super Mare (on Thursday 17th May) it will be the end of an inspiring journey for the father of four who once believed he was unemployable.

A new  urban style cricket programme to encourage teenagers in Somerset back into the sport is being launched by 1610 at four leisure centres in the county.

As a team leader at the1610 East Bridgwater Leisure Centre, Stuart Mapstone enjoys his job inspiring the local community to take up sport but now Stuart has an important new sporting role to play by carrying the Olympic Torch on part of its epic journey around Britain.

You are hired! Anne Marie is Somersets top apprentice

A nineteen year old leisure assistant at Shepton Mallet Leisure Centre Ann Marie Hervey has certainly got what it takes when it comes to her job as she has just won the Somerset Skills & Learning Apprentice of the Year Award 2011.

Why Alex is no fool for Sports Relief skydive

An 18 year old leisure assistant from Somerset who does not have a head for heights is planning to skydive on April 1 to help raise funds for Sports Relief. (Sports Relief Sunday 25th March)

1610 leisure trust is helping smokers in Somerset to  Take a Leap to quit their smoking habit as part of National No Smoking Day on Wednesday 14 March.

As the Government urges more employers to take on apprentices and to invest in training, 1610 leisure trust has been doing just that in Somerset and has been so successful that 80% of its apprentices have found employment with the leisure trust. Some of those successful apprentices are being rewarded along with other leisure trust staff at a special presentation evening at the new flagship Trinity Sports Centre in Bridgwater on Tuesday March 6.

Release Date: 01/03/2012 It is not just American high-school girls who know something about the razzmatazz of cheerleading as the members of the West Somerset Sharks Cheerleading team also know how to wow the crowds and compete with the very best. The team have just cheered their way to third place in their first ever national cheerleading competition.

Get on your marks for the new Bridgwater 10k this April

Novice runners and seasoned athletes will be heading for the starting line at a new 10K race which is due to be held in Bridgwater on Sunday 15 April (10am-1pm).

Torridge District Council has awarded a £1.4m contract to manage the districts leisure facilities for the next decade to the Somerset-based 1610 leisure trust.

Communities across Somerset are being offered free health and weight checks by 1610 leisure trust as part of a national campaign to combat obesity.

The local community and pupils at Preston School in Yeovil will be celebrating following the announcement of a major £800,000 investment in a new leisure centre at the site which is part of a joint partnership scheme between the school, 1610 leisure trust and South Somerset District Council.

1610 heralds a new era in community sport for Somerset Leisure

Somerset Leisure Trust is making its mark with a major new re-brand, 1610 has been selected as the new name for the Leisure Trust which manages 13 leisure centres across Somerset. 1610 was chosen as the exciting new name as it represents the number of square miles in Somerset and while the trust is keen to establish a new, modern and vibrant brand for itself, it still wishes to retain links with its community roots in Somerset.