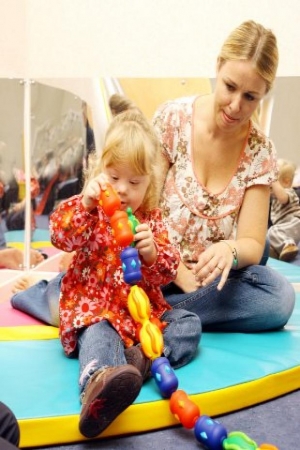 Brainwave is a national children’s charity with three Centres in Bridgwater, Somerset , Witham, Essex and Birchwood in Cheshire. Every year in this country thousands of children become brain injured, either through birth trauma, accident, genetic conditions or chromosome abnormality.

Brainwave helps such children to become as independent as they possibly can and through the Brainwave Programme many children learn to crawl, walk and talk and achieve milestones their parents never believed possible.

In the heart of London something is stirring as people get ready to don Santa suits anda pair of running shoes! Preparation is under way for the Brainwave Santa Dash when hundreds of Santas will be running through the streets of Central London on the evening of 10 December to raise funds for childrens charity Brainwave. Brainwave works with families to deliver individual, home-based therapy and exercises for children with disabilities and Developmental Delay to help them reach their full potential. This can be anything from walking to feeding themselves. By working with parents, giving them relevant therapy equipment and teaching them correct skills, they are empowered to actively participate in their childs development

Businesses and individuals are being invited to a fundraising clay pigeon shoot on the Duke and Duchess of Westminsters spectacular Eaton Estate and money raised will go to Brainwave, a childrens charity with Centres in Cheshire, Essex and Somerset. Brainwaves 4th Annual Clay Pigeon Shooting event will take place on Thursday 26th September 2013.

Cricket fans following Englands current progress in the 2013 Ashes will soon have the opportunity to spend an evening in the company of one of Englands greatest cricketers and the new President of the MCC as well as lending support to a childrens charity at the same time.

When Manchester mum Vickie Birtwistle developed a strange rash during pregnancy she assumed she had been bitten by an insect. What she couldnt have known was that she had contracted HSV-1, the cold sore virus, and that this would cross the placenta and give her unborn child, Lucas, meningitis. Lucas is celebrating his sixth birthday on 30 July and will take real pride in putting on his Man Utd football strip  seemingly an everyday action but one that holds particular significance for the little boy as the severe fitting which resulted from meningitis led to some damage to his brain and an eventual diagnosis of Cerebral Palsy. Vickie explains that until Lucas visited the charity Brainwave, based in Warrington, he found getting dressed very difficult.

A TV programme featuring Brainwave patron and singer Olly Murs raising money for the charity helped a Cornish family who felt there was nowhere else to turn when their daughter was diagnosed with Cerebral Palsy at just 18 months old.

Liverpool Premier League footballer Steven Gerrard MBE took time out of his busy schedule to visit childrens charity Brainwave North West Centre causing great excitement among staff and families as he toured the North West Centre which helps families with children who have Development Delay, Autism, Cerebral Palsy and Downs syndrome. Steven met two of the Brainwave families, both from Warrington that he is sponsoring through the charitys Guardian Scheme.

London based companies, organisations and individuals are being asked to take part in the London Brainwave Walk for Kids, raising funds for childrens charity Brainwave. The fundraising event is adopting a very glamorous James Bond theme for its charity treasure hunt taking place at 5.30pm on 16 July, Bishopsgate Institute, 230 Bishopsgate, London EC2M 4QH.

HRH, The Countess of Wessex GCVO will attend the National Conference of the Association of Inner Wheel Clubs in Great Britain and Ireland on 23 April at the Plymouth Pavilions where she will see President of Inner Wheel, Dr Sheila Halliday-Pegg present a cheque to Brainwave CEO Phil Edge to mark the adoption of Brainwave as its Charity of the Year.

Somerset-based charity Brainwave was delighted to play host to some of the members of Taunton Round Table on Friday 22 March when the organisation visited the charity to hand over a huge cheque for £10,000. Taunton Round Table raised the £10,000 by holding a dinner in Taunton in November 2012. Over 400 people attended and the speaker was Peter Shilton ex-England International who gave a witty speech about his days playing for England and his many clubs including Nottingham Forest under Brian Clough when they won the European Cup twice. There was a raffle and an auction and Peter also supplied copies of his autobiography and other signed items to help raise the money

Two and a half year old Elijah, son of two British Armed Forces personnel based in Plymouth, has made his parents proud with the progress he has made since attending Brainwave in September 2012. Before the family turned to Brainwave, Elijah was unable to walk unaided and was not reaching his developmental milestones.

Toddler Benjamin from Bath really is a unique little boy. He was born missing a significant part of a chromosome in such a rare area that no one else in the world is thought to have this deletion and as a result his parents have turned to childrens charity Brainwave to help Benjamin overcome some of the problems that have arisen as a result of his condition.

A recipe for success

Chef Aiden Byrne, and his wife to be, Sarah Broadley have very kindly nominated Childrens Charity Brainwave, as their Charity of the Year for The Church Green British Grill Restaurant based in Lymm. They will be raising funds for Brainwaves North West Centre based in Warrington.

Ten years ago in February 2003 HRH The Countess of Wessex GCVO agreed to become President of childrens charity Brainwave. The charity works with families to deliver home based individual therapies and exercises to help children with disabilities and Developmental Delay reach their full potential.

Runners from all over the country braved the wet weather to take part in the third Brainwave 5k Santa Dash and accompanying 1k parade to raise an estimated £8K for the charity which provides therapy programmes for children with disabilities such as autism and cerebral palsy.

Somerset based Agusta Westland recently organised over 30 volunteers from Veolia Environmental Services to help childrens charity Brainwave with some essential site maintenance and clearing of ground for the charitys popular Trim Trail.

Businesses and individuals are being urged to support a fundraising Bollywood Dinner which is being held at the Hotel Russell, London on 10 October and will include the auction of an Albert Square plaque signed by the cast of Eastenders! The event is being held in aid of childrens charity Brainwave

Businesses and individuals are being urged to support a fundraising Clay Pigeon Shoot which is being held at The Royal Berkshire Shooting School, Pangbourne, near Reading on 19 September starting at 9.15am. The event is being held in aid of childrens charity Brainwave which supports children with disabilities.

On 21 June London based companies got together to take part in a 5km treasure hunt around London raising enough funds to sponsor two children from the charity Brainwave for an entire year. Brainwave delivers home-based therapy programmes to children with a range of conditions including Cerebral Palsy, Downs, Autism and Development Delay.

Cheryl Fergison (who played Heather Trott in Eastenders) took time out recently from a busy work schedule to present an Eastenders Albert Square street plaque signed by all the cast from the popular soap to Brainwave childrens charity at Chislehurst Golf Club. The street plaque will be auctioned at Brainwaves fundraising London Bollywood Dinner that marks the 30th Anniversary of the charity and will be held on Wednesday 10 October at The Hotel Russell.

A photo shoot will take place at 9.30am on the 22 June at Bridgewater Place, Birchwood Park with the whole team of cyclists

Mobile phone recycling company forgottenmobile.com is proud to announce its partnership with Brainwave, a charity that works with families to deliver individual home based therapies and exercises that help children, with disabilities and development delay, reach their full potential.

HRH The Countess of Wessex will visit the childrens charity, Brainwave, on Thursday 10 May at its South West Centre in Bridgwater, Somerset.

Having cemented its footing in Preston, Pettys has been approached to help Brainwave develop their presence in the north of Lancashire, assisting in not only providing property advice but bringing the business community together by hosting a number of charity lunches for premiere professionals, entrepreneurs and business owners to raise vital funds for this worthy cause.

Ollys No Deal is a great Deal for Brainwave

Childrens charity Brainwave is delighted to announce that following its Patron singer Olly Murss performance on the Channel 4 Show Celebrity Deal or No Deal which resulted in him raising the sum of 50 pence after a disastrous run with the legendary boxes, Olly has made a personal donation of £5,000 to support the charitys work with children who have disabilities and Development Delay.

To celebrate a 30th birthday what could be more appropriate than a cake, and when it comes to fundraising, one cake is never enough! To celebrate its 30th birthday in 2012 childrens charity Brainwave is launching a year long Cupcake Bake fundraiser backed by TV celebrity chef Simon Rimmer who has produced a special recipe for the occasion.

Childrens charity Brainwave has announced a change at the top. Phil Edge, who was previously Brainwaves Head of Therapy, has taken over as Chief Executive Officer. Phil will take the helm from 1 December and brings to the role a combination of continuity and widespread experience, having been with the Charity for 25 years.

It’s a delight to work with Jane. Her proactivity and willingness to do the very best she can for Brainwave has been a tremendous aid in helping us raise our profile. Despite the fact we are not her biggest client, she always makes us feel special.