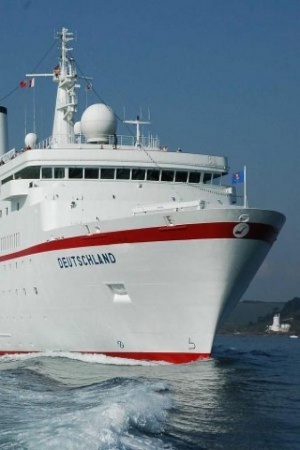 Destination South West actively promotes the Region to ensure that the South West continues to attract high profile cruise ships to its ports. Partners include ports, local government authorities, tourist attractions, and other organisations with an interest in the cruise industry.

South West tourism attractions are being urged to join forces with their nearest ports to promote themselves to the expanding cruise liner market as Destination South West reports back from a recent trip to the USA. At the beginning of February the team from Destination South West met with senior representatives from Crystal Cruises, Princess Cruises, Cruise Norway, Regent Oceania and several other movers and shakers from the sector.

Ilfracombe Harbour, the Jewel in the Crown of the North Devon Coast, is set to welcome both the MV Rotterdam and MV Prinsendam cruise ships during early Summer 2011. This will be a first time visit for both ships, and indeed the Holland America Line. Ilfracombe Harbour Master, Lt Cdr Rob Lawson, says, We have been members of Destination South West for seven years now, during which time Ilfracombe has tried hard to find its place in the Cruise market and now all the hard work now seems to be paying off. With the 'Hidden Edge' of the Exmoor National Park on our doorstep and the highest sea cliffs in England rising to meet the moor the harbour boasts a very dramatic setting.

The cruise market is an increasingly important one for the South West in 2011 with all eyes looking towards the UK and the forthcoming Olympic Games in just 18 months time. The South West is poised to play a particularly significant role with the Olympic and Paralympics Sailing events staged at Weymouth Bay and Portland Harbour and two ambassadors for Destination South West will be making sure that the cruise market knows of the record breaking welcome that awaits it in UK South West ports.