Home > Our Clients > The Horn of Plenty 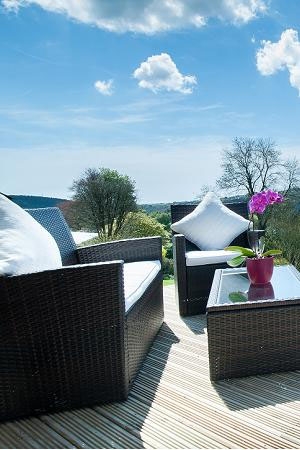 This small Country House Hotel in Devon has been thrilling guests for over 40 years with some of the very best food and accommodation the South West has to offer. Expect superb food, elegant surroundings, stunning views and warm, friendly staff. An ideal hotel for a luxury break, a celebratory meal, a house party or a romantic wedding in Devon.

Press Releases for The Horn of Plenty

Country house hotel The Horn of Plenty has six special reasons to celebrate this summer as it welcomes guests to six new gorgeous rooms which have been built as an extension to its Garden Wing.

Outstanding reviews have helped a West Country hotel win one of the most important accolades it could hope for from one of the most discerning audiences in the UK. Recent brides and grooms who held their wedding at The Horn of Plenty in Tavistock made their views clear when they voted it Devon Wedding Venue of the Year in the keenly contested 2013 West Country Wedding Awards. Coupled with the customer service, quality of the venue and great value for money, The Horn of Plenty also has fantastic views across the Tamar Valley which help to make it the hotel of choice when it comes to choosing where to get married in the West Country.

Devon country house hotel The Horn of Plenty, located in the beautiful Tamar Valley just outside Tavistock, is celebrating its Double Gold win in the Taste of the West Awards, receiving Gold Awards for Accommodation with Breakfast and also for its exceptional fine dining Restaurant.