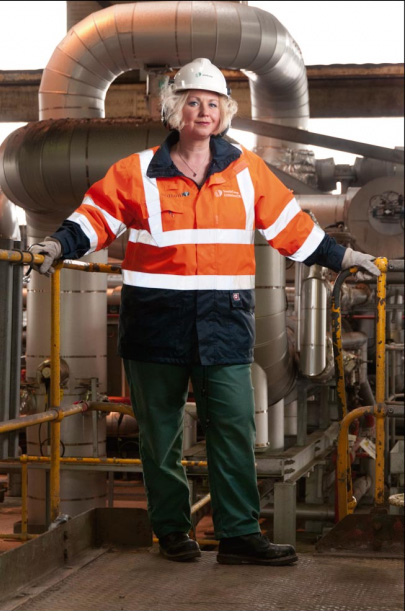 Picture Caption: Jane Atkinson, the first woman in the world to manage a blast furnace; 9,200 tonnes of liquid iron at 1700 degrees!

Four iconic new portraits unveiled at the Discovery Museum represent a particular significance for Somerset photographer Anita Corbin who was chosen to undertake the photography commission on behalf of the North East region’s science and industry museum in Newcastle.

The portraits are part of an exhibition entitled Trailblazers, exploring the achievements of women, both living and historic, who have made a significant contribution to the science, technology, engineering and mathematics (STEM) industries. Anita is also planning to feature at least one of the four women (pictured), Jane Atkinson, in her ground breaking project “First Women” which will be unveiled in 2018 to mark the 100th anniversary of women’s suffrage.

Anita says, “I have spent my life promoting positive images of women and when the names of the sitters were unveiled in March I was really excited to meet some of the women I would be photographing and start the real creative process of deciding how and where to shoot them. I truly believe that photography as a visual tool can inspire and change attitudes, and by creating role models we can encourage young women to aspire to a life in Science, Technology, Engineering and Maths.

Trailblazers includes 24 portraits, drawn mainly from the National Portrait Gallery collection. All the portraits feature groundbreaking female scientists who have made their mark in science and technology over the past 250 years.

The four women featuring in the new Trailblazers’ portraits are Jane Atkinson, Senior Vice President, Sembcorp Utilities UK Asset Management and in 2007 winner of the CBI First Woman Award in Manufacturing as she frequently has been at the forefront of women in engineering and industry; also Fiona Cruickshank, non-exec director at SCM Pharma, a leading business figure and a former North East Woman Entrepreneur of the Year. Joining Jane and Fiona are Nicola Pearsall, Director of Northumbria Photovoltaics Applications Centre (NPAC) and group leader for the Energy Systems and Materials research group in the School of Computing, Engineering and Information Sciences; and Laura Wilkinson, the youngest of the four selected, and an Engineer with Northumbrian Water with a degree in Applied Biology which has allowed her to use her knowledge on microbiological processes to great effect.

Anita won the commission thanks in part to the work she had carried out on ‘Science in Profile’ when between 1988-1989 she worked with her partner John O’Grady and The British Council on their collection of 24 colour portraits of Great British Scientists. This included the last official portrait of Nobel Prize winner Dorothy Hodgkin and Dorothy is also featured in the Trailblazers’ exhibition.

Anita continues, “I have been a portrait photographer all my working life and I am passionate about creating images of girls and women that make people stop and think. My passion is fired by years of working as an editorial portrait photographer with the Sunday Times and Observer colour magazines, where I was often sent around the world to cover ‘human interest’ stories involving women.

“When on assignment I use my intuition and creativity, to shine new light on a person, to give the portrait originality and longevity. As a working photographer I have learnt to believe in my own convictions, developing my own style, creating portraits that I believe reveal the ‘true self’ of my subjects. I encourage my subjects to ‘be themselves’ and to trust me to interpret their individuality.

“Also the preparation and planning required beforehand means that editing is a huge responsibility as it is the manifestation of the shoot, with everything going into the split second of the shutter opening! If all has gone well the pictures will speak to you and you will be able to choose the definitive shots easily.

“It is this strong belief in the power of photography that has lead me to create my collection of ‘First Women’ portraits with the mission statement ‘Inspiring women in the UK’.”

Anita’s project First Women looks at how women will be remembered over the past 100 years. In the years leading up to 2018, the 100th anniversary of Women’s Suffrage, Anita is shooting and collecting 100 iconic portraits of 21st century women who have achieved the landmark title “First Woman” across a range of fields.

In 2018 Anita will launch the First Women travelling exhibition throughout the UK in celebration of 20th and 21st century women. The exhibition will feature three types of photography: portraiture, documentary and archive and will be linked to an interactive website as well as the publication of a beautiful photographic book. Each unique portrait will feature extended captions and introductory essays.