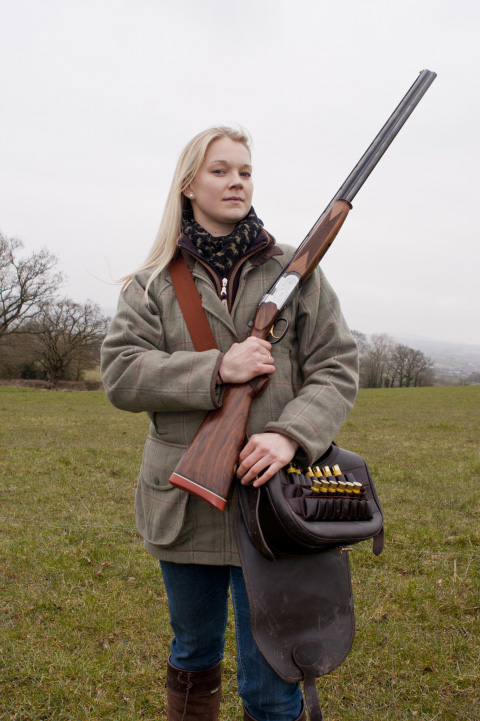 Prominent South West photographer Anita Corbin has carried out a very special assignment to mark this year’s International Women’s Day on Friday, 8 March 2013. She has photographed two outstanding Somerset women who were the first to achieve a particular milestone in their chosen professions. The two women who will be included in Anita’s groundbreaking project First Women are Abbey Burton, youngest woman to win World Cup Gold in the Women's Olympic Trap at Shooting (May 2012) and Charlotte Budd, the first woman to ride in the Grand National (1977).

Anita, who with her husband is owner of Wellington based Corbin O’Grady Studio, says, “I was approached by ITV West who were looking to mark International Women’s Day by highlighting some of the inspirational women, both senior and junior, who live and work in our county.”

On International Woman’s Day, ITV will broadcast Anita re-creating the quirky shot of Charlotte Budd that she had taken previously for inclusion in her 2018 exhibition as well as a new photograph of Olympic contender Abbey Burton. Anita’s project First Women looks at how women will be remembered over the past 100 years. In the years leading up to 2018, the 100th anniversary of Women’s Suffrage, Anita is shooting and collecting 100 iconic portraits of 21st century women who have achieved the landmark title “First Woman” across a range of fields.

In 2018 Anita will launch the First Women travelling exhibition throughout the UK in celebration of 20th and 21st century women. The exhibition will feature three types of photography: portraiture, documentary and archive and will be linked to an interactive website as well as the publication of a beautiful photographic book. Each unique portrait will feature extended captions and introductory essays.

Anita Corbin, professional photographer, gets some advice on a different type of shooting from Abbey Burton. Charlotte Budd, First Woman to ride in the Grand National 1977. From the series First Women by Anita Corbin, July 2010. Further information: Anita Corbin, Tel: 01823 662329 or mob: 07802 613911 or check out: www.1stwomenuk.co.uk

Anita and John, of Corbin O’Grady Studio, have been working together since 1984 and moved their business from London to Wellington in 2001.